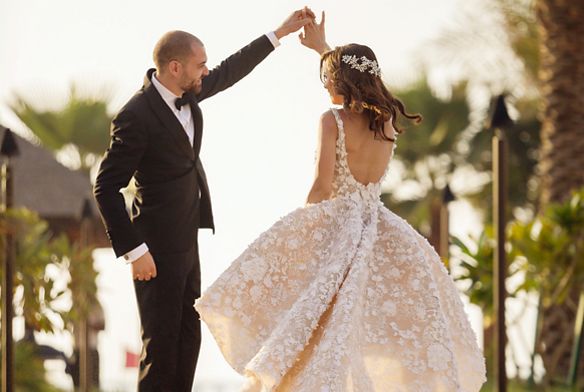 The Most Romantic Wedding Traditions from Around the World: Germany, Russia & Ireland

If you’d like to add a slice of your heritage to your wedding ceremony, you’re not alone. Millions of couples are embracing their ancestry and choosing to incorporate some of the best traditions from around the world in their ceremonies here at home. Here are some of the most interesting wedding traditions you might find if you attended a wedding in Germany, Russia, or Ireland. If you or your family are from one of these countries, why not try adding some phrases from your ancestor’s native tongue in your wedding vows for a truly memorable touch!

To fund her future wedding, when a baby girl is born in Germany, several trees are planted and tended throughout her childhood. When she is to be married, the trees are sold to pay for her wedding and to act as a dowry. To help defray the costs of a honeymoon, friends, and family of the wedding couple will make a newspaper or newsletter featuring pictures and articles about the couple’s youth. This newsletter is sold at the wedding.

A German wedding can last up to three days. There is first a civil ceremony, then the following day is a traditional ceremony. Finally on the third day is a religious ceremony. Guests bring old dishes to the second night’s party to break, and the couple sweeps them up. This symbolizes that their home will never be broken.

As the wedding couple leaves the church, they throw coins to the children who have attended. A customary tradition is for the best man to steal the bride and take her to a local pub, where they drink champagne and hide.

The groom must find them, and pay for all they drank. Also, before leaving the reception hall, guests block the door and demand payment from the groom (usually in the form of a promise of a party) before they allow the wedding couple to leave for their honeymoon.

What is referred to in western society as wedding rings are in Russia called engagement rings. These plain gold bands are worn on the ring finger of the right hand. When a person is widowed or divorced, they will move the ring to the left hand. The groom pays for the ring, although the couple chooses them together.

A holdover from the days of communism is a procession of cars that arrives at the ceremony. Since large cars were a sign of wealth, the effort is made to rent one for the bride and groom. In addition, guests to the wedding will each drive to the wedding alone to increase the size of the procession. The groom traditionally takes the bride to the church, but before he is allowed to do so, he must pass a series of challenges put up by her family and friends, including trivia questions, physical obstacles, and even an actual climb up to the bride’s window.

Marriage ceremonies are held in the licensing office and must be witnessed. Although church weddings are held, they have no legal significance, so they are often held after the legal ceremony. At the reception, it is customary to drink to excess, with a series of toasts offered to the bride and groom. Prior to leaving the reception hall, the bride is stolen away by the friends of the groom. He must then locate her and pay her ransom. This can happen several times, so the groom must be ever watchful of his new wife.

Instead of wedding bands, more and more Irish couples are choosing to wear the Claddagh ring. This design has a heart being held on either side with a hand, and a crown on top. Wearing the ring on the left hand with the heart facing you indicates marriage, wearing it with the heart facing away means you are single. The ring may be used as an engagement ring or a wedding band and is often passed from mother to daughter.

As the bride and groom leave the church, they throw a handful of coins into the crowd of waiting guests. The bride will carry a horseshoe with her for luck throughout her marriage. This is usually sewn into the dress, although it might be a plastic cake decoration today. Truly traditional Irish weddings are held only from April through October, but never in the month of May due to superstition.

This half of the year is considered the “light” half. Mead, which is a honey wine, is served at Irish receptions and is believed to be the source of the word honeymoon. It is thought to increase virility and fertility and is therefore in great abundance at weddings. As the bride and groom leave the reception hall, there are often bagpipes stationed just outside to play them to their waiting car, which whisks them away to their honeymoon spot.

How to Save Your Wedding When You Run Out of Money

How to Choose the Perfect Wedding Transport: Useful Hints and Tips

How to Structure and Word Your Wedding Invitation

How to Save Your Wedding When You Run Out of Money